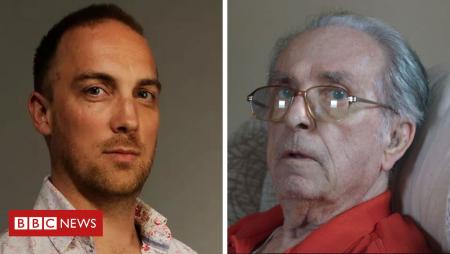 The old man is in the hospital bed, drawing his last, rattling breath as it fades from life.

The film of the camera, placed just to the side of him, continues to spin. We see the nurses move it into another room before gently clean her body.

“Nobody wants to die, but it is a natural thing, we are biologically determined to die,” said documentary maker Steven Eastwood.

His film, the Island, lays bare the process of the death by shooting of four people in the terminal phase.

“Death is seen as something shameful – we believe that we are a progressive company, but we suppress and deny the death,” said Steven.

“We are not better than the Victorians.”

He was a quiet spectator in the course of the last year of his life topics, filmed in their homes before they became part of the daily rhythms of life in a hospice.

“To say that you don’t want that to happen, you are to put off facing something,” he says.

“We need a better awareness of the death to be more familiar with our mortality. I do not think that it is horrible.”

The documentary arrived after the Fabrica, a gallery in Brighton, has commissioned a film about the end of life.

A London-based filmmaker of the proposal has been accepted, and he managed to get access to a movie in a hospice on the Isle of Wight.

He speaks fondly of his time, saying: “these are four people who I liked a lot about – Alan, Roy, Marie and Jamie; three were in their 80s and one was in her 40s.”

Steven regularly made the five-hour journey to the hospital, including the boat trip to the island, which has a slow, often hypnotic images of the documentary and its trailer.

He made the film after having “two quite significant loss – my mother-in-law and my best friend who was the same age as me.

“So, I realized that I didn’t know much about this as palliative care.”

Steven believes that we need to face the reality of death are part of our daily lives, so it is less scary.

“I think that we all have an existential anxiety -” if I see someone that I love who is dead, it will be too traumatic, it will replace all the images I have of them, I will never be able to unsee it, somehow it’s going to hurt me’.

“But for me, this is not the case, to be with someone after his death, that intimacy. I found it quite empowering and peaceful.”

It has a huge admiration for people who work in hospices, and hopes that his film, “celebrate and demonstrate what palliative care”.

“The most radical, extraordinary people in our society are the least visible,” he says.

“They are the care givers. And the care that we receive at the end of our life is extraordinary.

“These hospices where people have anxiety to the visit – they are not morbid, sterile spaces, they are also places of life.”

He said that according to the projections of the Island, a stranger approached him, saying that he had “less fear of dying.

Steven adds: “This is not an ambition of mine, but if you can sit through the film and at the end the impression of lightness, if you can make a sort of peace with something that is going to happen to all of us, then that is a good thing.”

He speaks with emotion of his subjects, talking at length about Alan, whose death we see at the beginning of the film. Alan died of cancer.’He was living in the smoke’

“Alan had chain smoked since he was 16 years old and he smokes in the hospice with a nurse lighting her cigarette. But he was not dying of a smoking-related cancer.

“This is part of what palliative care is – helping someone to smoke until they die.

“The doctors felt that if he had not been smoking he would have died a few weeks earlier – that he was living in the smoke.”

Alan was invited to film his last moments.

“The second time I met Alan, we had a report, he said, ‘I think you’d like to stay with me all the way through and I think this would be a great”.

“He wanted to do something radical with his death, it felt quite radical about his life.

“He believed our fabric is just one vehicle and we translate it into something else.

“As far as it was, there was no self-consciousness around his image, he thought it was a way to mark something of his philosophy. It has become my movie star, he was like my Burt Lancaster.”

Steven remember to watch Alan die.’The happiness in his eyes when he died’

“His death has been a long, short of breath. It was very quiet and very beautiful and I felt really moved. I didn’t feel sad. He was really ready to die.”

Alan told Steven that he had seen a man die when he was just 19 years old, during active service in the armed forces in North Africa. His commanding officer was shot, and died in his arms.

“He has met this man and said,” I saw the happiness in his eyes that he is dead, and I knew that what we are experiencing now, is not it, there are no more”.

“So, for him, his death was the thing he had been waiting for. You can’t ask for anything.”

Steven acknowledges that, of course, death can be sudden or untimely, as Jamie.

“Jamie has stage 4 stomach cancer and had a young family, his attachment to his daughter was so amazing.

“He wanted to die in the best way he could with his daughter, then he was involved in everything, has talked about his treatment, about what it would be like when he is not there.

“He is the person who, I get upset thinking about it.” Put to death on the school’s calendar Call to end the “taboo” of talking about death How to help a child cope with a death?

The film has been used to assist physicians in the treatment of end of life care, and Steven and his producer are in partnership with Sussex NHS trust.

“We did two sessions of trainees from doctors, to use the film as a way to talk about how to talk about death and dying, and how we talk to patients.”

It is also required to attract a young audience, as he says people in their 20s are “the most important of the death deniers”.

Steven talks about the pressure to be “productive, youth, to look good”.

“This idea that we are terminal and have an end, it is too much. I’ve talked to young people who are thinking about their end of life and say, ‘oh, I just want to take a pill at the end, at the time where I am is no longer viable, I switch me off”.

“I believe that it is difficult to face your own mortality.”

Steven, who also volunteers at her hospice, think of other cultures handle death better than we do, saying in Ireland” you see more sustained process of mourning and more of a familiarity, the body”.

He also talks about Asia and Latin America, where they “have a completely different attitude towards the process of death.”

“I think we need a better education – we are finished, our bodies will decay, and I’ve made my peace with it.

“I hope that the film can return us to a certain extent our biological body, and say yes, everyone is going to die, most people are going to die this way, in their 70’s or 80’s from heart disease or cancer, and the treatment will be extraordinary.

“I don’t find that a burden of thought. I felt that I was misinformed, and now I feel better informed by the completion of the film – I hope that it will do that for people.

“We die and we don’t have to turn it into a kind of sanctuary, this is the life. And I think that Alan has shown me that, then, yes, I was very, very happy to be invited to film.”

The island is released in UK cinemas on Friday 14 September.

Bake Off jumps in the vegan trend for the new series

August 22, 2018 trump Comments Off on Bake Off jumps in the vegan trend for the new series

Star Wars: “the Time for the female director’

December 14, 2017 trump Comments Off on Star Wars: “the Time for the female director’