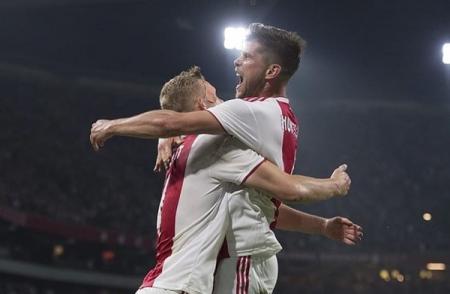 Dynamo Kiev for a place in the group stage of the Champions League will play against Ajax. In order to understand the scenario before the game about the favorite of the series just look at the transfer value of the players.

Transfermarkt evaluates the composition of the Ajax 3.5 times more expensive than the Dynamo (229,15 million euros against 67,20 million).

The most expensive players of the Dutch – 19-year-old defender, Mattijs de Ligt (EUR 40 million), who are the giants of Juventus and Barcelona, the 20-year-old attacking midfielder Hakim Ziyech (25 million), as well as 21-year-old winger David Neres (20 million).

For comparison, the most expensive player is Dynamo midfielder Victor Tsygankov (8 million euros), followed by Denys Harmash and newcomers Che Che Seleem, which are estimated at 5 million euros.

See also the ranking of most expensive Ukrainian football players.

Ajax and Dinamo will play in the playoff round of the Champions League on 22 and 28 August.

Egypt to 2018: structure and schedule

Shakhtar fans will drink free tea at the match against Vorskla

October 14, 2017 trump Comments Off on Shakhtar fans will drink free tea at the match against Vorskla

Guardiola is about the defeat to Liverpool: we Have another 90 minutes

April 9, 2018 trump Comments Off on Guardiola is about the defeat to Liverpool: we Have another 90 minutes