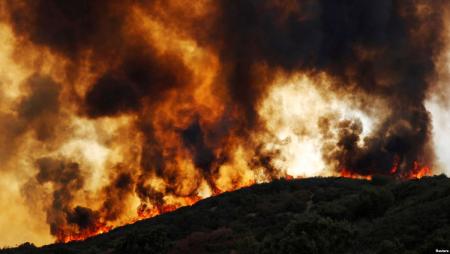 President Donald trump admitted wildfires in California large-scale natural disaster and has ordered the allocation of Federal funds to fight the fire that destroys the settlement on the arid West coast of the state.

“Assistance can include grants for temporary housing and repair of houses, cheap loans for losses of uninsured property and other programs aimed to help individuals and business owners cope with the aftermath of this natural disaster,” reads the White house statement issued Sunday.

“The authorities of state, tribal, and local governments and certain private nonprofit organizations can receive Federal funds through co-financing for carrying out emergency work, repair or replacement of facilities damaged by wildfires and strong winds in the County of Shasta”, – is spoken further in the document.

The statement noted that “work on the assessment of damages continues in other areas” and that after the completion of these works “can be highlighted and other districts”.

According to experts, currently raging in California 17 major fires. Thousands of people were forced to leave their homes. Eight people died in the fire. Yosemite national Park in the last week was closed because of the dangerous situation, although usually at this time of the year it attracted the largest number of tourists.

A big fire in Northern California was called the “fire Carr”. According to the authorities, two weeks after the occurrence of it is kept at 41%. Assuming he started from sparks caused by steel wheel trailer with a flat tire.

According to some estimates, the fire destroyed an area of approximately 533 square kilometers. Two firefighters died while trying to contain the fire.

Brown called large fires occurring in the last few years, the “new routine”. Representatives of the fire services of California noted that the fire season this year has only just begun.

December 30, 2016 trump Comments Off on Putin invited children of American diplomats on the Christmas tree in the Kremlin

Trump: the possibility of a summit in Singapore on June 12 remains

May 27, 2018 trump Comments Off on Trump: the possibility of a summit in Singapore on June 12 remains

October 19, 2017 trump Comments Off on Aides to Obama and Bush has denied trump’s words about the neglect of ex-presidents to the families of the victims