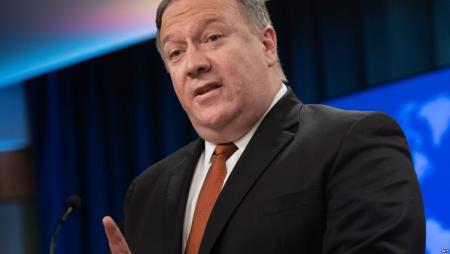 U.S. Secretary of state Mike Pompeo criticized his predecessor John Kerry for an informal meeting with the leaders of Iran.

At a press conference at the state Department, Pompeo said that Kerry is “actively undermining” the administration’s policy trump against Iran: “the actions of Secretary Kerry – an unprecedented and unprecedented. (…) They are more than unacceptable.”

Sharp criticism of Pompeo followed after President Donald trump on Twitter accused Kerry of “illegal” meetings with the Iranians, “which can only undermine the great work”: “He told them that they should wait out the administration of the trump! He hasn’t registered as a lobbyist for a foreign government? Bad!”.

According to the decision of trump, the United States withdrew from the multilateral agreement with Iran, which was signed by John Kerry. When you trump the United States carried out extremely tough policy against Iran.

Kerry in an interview with Fox News reported that after leaving the post of Secretary of state in January of 2017 he’s “three or four times,” met with the Minister of foreign Affairs of Iran Mohammad Javad Zarif. Kerry also accused the administration of the tramp that seeks regime change in Tehran.

After the statement Pompeo Kerry wrote on Twitter that President Trump should be more concerned about meeting his former campaign Manager Paul Manafort with spectaculorum Robert Muller, what about “my meetings with the foreign Minister of Iran.”

Press Secretary Kerry issued a statement which stated: “There is nothing unusual, and even more unprecedented and unprecedented that former diplomats meet with foreign colleagues. Unseen and unprecedented fact that the rostrum of the state Department is used for political theater.”

September 4, 2018 trump Comments Off on The jury in the second case Manafort will not be isolated for the duration of the process

April 22, 2018 trump Comments Off on The United States condemned the use of force against demonstrators in Nicaragua

October 23, 2017 trump Comments Off on The widow of the deceased in the Niger military said that trump couldn’t remember his name