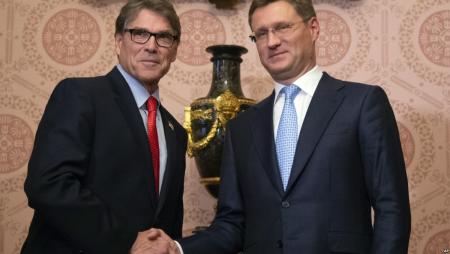 The Minister of energy Rick Perry flew on Friday 14 November in Moscow, where he held a number of important meetings. About it reports Reuters.

As he told Perry in an interview with Reuters, in the Russian capital, he met with Alexander Novak, Minister of energy of Russia.

Turning to the question “complicated relationship” between Washington and Moscow, the Minister said that he and his Russian counterpart “would not want to see further expansion of U.S. sanctions against Russia.” However, Perry added that now the ball is in the Russian half of the field and further development of the situation depends on the position of Moscow.

“Russia has the opportunity to send a message (to the world) that they want to be good neighbors that they are going to maintain a more civilized relations with the surrounding countries. From our point of view, they have not yet demonstrated that in relations with Ukraine,” said Rick Perry.

Reuters notes that Russia’s aggressive behavior can cause US sanctions against the gas pipeline project “Nord stream-2”.

“As long as these (peaceful) signals will not be sent to potentially sanctions against the “Nord stream” continue to be very real measure,” warned the Russian authorities the Minister of energy of the United States.

The same day Perry, according to the U.S. Embassy in Moscow, met with Alexei Likhachev, head of the Russian state Corporation “Rosatom”.

The United States and Russia, reads the statement of the Embassy, holds a unique position in the world market of an atom, occupying a leading position due to its influence and experience in security matters.

Both countries have in the past worked together on these issues. At the same time, in recent years, the level of this cooperation has decreased, despite the fact that the relevance of these issues only increases.

U.S. energy Secretary and the head of “Rosatom” discussed the potential for bilateral cooperation and development trends of the industry.

Tillerson: “Associated with the Crimea sanctions would remain in force”

December 8, 2017 trump Comments Off on Tillerson: “Associated with the Crimea sanctions would remain in force”

USA admitted to eight members of the “caravan of migrants”

May 1, 2018 trump Comments Off on USA admitted to eight members of the “caravan of migrants”

What the accused Michael Flynn?

December 2, 2017 trump Comments Off on What the accused Michael Flynn?