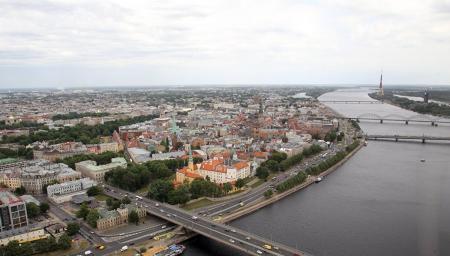 MOSCOW, 22 Aug — RIA Novosti. Press Secretary of Russian President Dmitry Peskov commented on the statement by Estonia and Latvia who intend to receive compensation for “Soviet occupation”. According to him, Russia first of all, do not agree to by this term.

“Of course, do not agree with the term “Soviet occupation”. Second, we do not agree that you can mention any compensation,” said Sands.

He also asked not to forget the contribution of the Soviet Union in the development of the Baltic republics.

Earlier the head of Ministry of justice of Estonia and Latvia Urmas Reinsalu and Dzintars Rasnacs made in a Memorandum which stated that they will get compensation for the “Soviet occupation”. They shared with each other a plan of action on this issue, including at the UN level. The point of view of Moscow

In addition, the term “occupation” here in General can not be applied, as between the USSR and the Baltic States was not conducted military operations, and the deployment of troops took place on a contractual basis and with the Express consent existed in these republics authorities.

Moreover, in Latvia, Lithuania and Estonia during their stay in the Soviet Union, with the exception of the Nazi occupation during the great Patriotic war, worked with the national authorities. “Futile and pointless”

The plans of the Ministers of the Baltic republics said Russian parliamentarians. So, according to the head of the international Committee of the Federation Council, Konstantin Kosachev, is “a senseless and futile maneuver the Baltic Russophobes, making their own career”.

The Senator added that the theme is not new and react to it is not necessary.

In the same vein, spoke and the Chairman of the Duma Committee on international Affairs Leonid Slutsky.

“It’s a point in the endless Russophobic campaign. Thus Latvia and Estonia are trying once again to remind myself. These requirements are absolutely hopeless and pointless from the point of view of obtaining results,” he told reporters.

The MP believes that this issue is unlikely to be seriously discussed at the UN level. “The international community, on the contrary, for a long time should pay attention to the systematic violations of human rights and discrimination of Russian-speaking citizens in the Baltic States, as well as the ongoing attempts to glorify fascism. Glorifying Nazi marches came to Europe from Riga and Tallinn,” added Slutsky. The lawyer

The term “Soviet occupation” legally inapplicable to Estonia and Latvia to try to achieve from Russia of compensation for damage from it, according to the President and member of Executive Committee of Russian Association of international law international law Anatoly Kapustin.

He recalled that the authorities of the Baltic republics have made the decision on joining the USSR, however, during the great Patriotic war, they occupied the troops of the Wehrmacht. As soon as the Baltic States returned to the Soviet Union, any documents that these territories are under occupation, were not accepted, the expert said.

“They should enjoy the same rights as all other Soviet republics, carried the same duties, receive preferences, they were part of the state, which then existed”, — said Kapustin.

He also touched on the fact that some States never recognized the Baltic republics of the Soviet Union. According to Kapustin, from the point of view of international law is a fairly complex issue.

“The US has always seemingly said that they do not recognize these territories part of the Soviet Union, but, nevertheless, when he concluded certain treaties to any reservations in respect of these territories has not been done. They have extended their contracts to the entire territory of the USSR, — said the lawyer.

She stressed that when the Baltic States seceded from the Soviet Union, they didn’t say freed from occupation, and the formation of new constitutions, laws and structures of power came from the fact that they gained independence as a result of the output. So from a legal point of view, the term “occupation” here is absolutely inapplicable.

“In fact, anything you can say, but legally, the question of the occupation governed by the Geneva conventions of 1949… And if you take the period before the Second world war – it was the Hague Convention. Neither the Convention were not applicable to the situation with the Baltic States because they voluntarily expressed a desire to join the Soviet Union”, — said Kapustin.

As for damage, compensation for which you want to get the Baltic States, he said, then Russia will be able to define a clear position: in response to count how much has been transferred from the budget of the Republic. “Do they have nothing else”

Deputy head of the Institute of CIS countries Vladimir Zharikhin suggested that the Baltic countries have once again raised the issue of the “Soviet occupation” based on the fact that their anti-Russian activities will appreciate in the West.

“They can walk UN – do something they have nothing else. To restore its own industry and economy is difficult, but to walk in UN – is the most lovely thing,” said the analyst on radio Sputnik.

However, he noted that Riga and Tallinn would cost to begin your claims, not with Russia.

“After all these republics were rarely independent, and generally in a part of Germany, Poland, Sweden. That began with Germany. But felt afraid to go to Germany… And if we talk seriously, we can send these Republic not only historians, but also lawyers, and to put counter-claims – and not in the media, and in international judicial bodies. Maybe the enthusiasm to engage in politicking, they will have less,” said Zharikhin.

September 4, 2018 trump Comments Off on At the Golf club trump shooting occurred

In Kazakhstan began anti-terrorist exercises of the CSTO countries

July 2, 2018 trump Comments Off on In Kazakhstan began anti-terrorist exercises of the CSTO countries

“Raising trump”: the ex-wife of the President of the United States began to write his memoirs

March 17, 2017 trump Comments Off on “Raising trump”: the ex-wife of the President of the United States began to write his memoirs