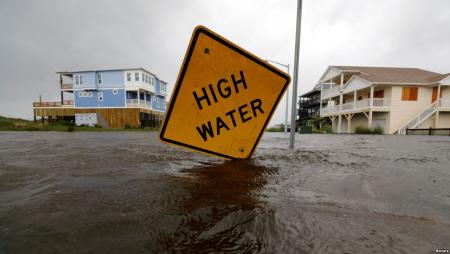 “Nightingale” is no longer a tropical storm as it weakened to the level of a tropical depression (area of low atmospheric pressure), according to the national center for monitoring hurricanes.

At the same time, the center noted that “flooding and major flooding of rivers will continue on a large area of” North and South Carolina.

“It is still catastrophic, life – threatening storm”, with these words, the meteorologist centre, Zack Taylor describes “Florence,” which claimed the lives of at least 13 people.

After the strongest rains flood will continue, probably several days, if not weeks, due to river flooding.

In the course of its movement “Nightingale” will cause “excessive precipitation” in North and South Carolina, and Virginia.

The centre for monitoring hurricanes also announced that on Sunday, you may see several tornadoes in North Carolina and Eastern South Carolina.

It is expected that the remains of “Nightingale” will pick up speed when the elements move to the North Sunday and Monday. In the end she gets to the North-East USA and will go to the sea.

Will the RT channel foreign agent?

October 27, 2017 trump Comments Off on Will the RT channel foreign agent?

August 17, 2018 trump Comments Off on Moscow called “useless” new US sanctions against three companies trading with the DPRK

December 28, 2016 trump Comments Off on Abe’s visit to pearl Harbor demonstrated the strength of U.S.-Japanese relations