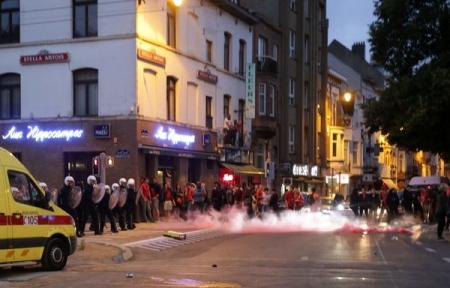 Fans of the Belgian national team rioted in Brussels after the defeat of the national team in the 1/2 final match of the 2018 world Cup against France.

According to TV channel RTBF, gathered in the square Miroir, the fans began to turn over the tables of local cafes, throwing stones at police and staged a mass brawl.

As a result of collision with the fans wounded police officer.

Recall that France was stronger than Belgium and made the final of the 2018 world Cup. See also video goals and match review France – Belgium.

Aguero returned to training after an accident

October 13, 2017 trump Comments Off on Aguero returned to training after an accident

July 29, 2018 trump Comments Off on Dynamo didn’t shake hands with Moraes before the match for the super Cup

May 17, 2017 trump Comments Off on Sanjar â€” the best coach of the 29th round of the Premier League