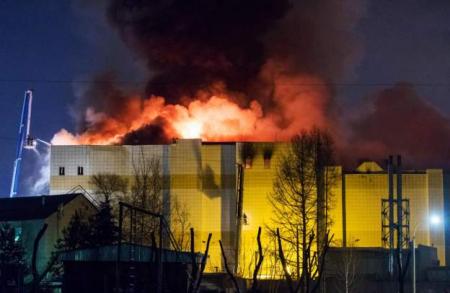 The cause of the fire at the Mall, “Winter cherry” in Russian Kemerovo was a short circuit or “use of fire”. This was at a meeting with Russian President Vladimir Putin in Kemerovo said the head of the Russian Sledkoma Alexander Bastrykin, broadcast meetings led channel “Russia 24”.

“The fire – a children’s Playground, fourth floor. We have now appointed examination, consult together. There are two versions – either it is a spontaneous combustion as a result of bad electricians, which has closed, or the version that we believe less and less, the use of open fire,” – said Bastrykin.

He added that in the framework of a criminal investigation of the death during the fire of dozens of people assigned to the electrical, construction and technical expertise.

A fire in a shopping Mall in Kemerovo took place on the afternoon of March 25. According to the MOE, the fire started on the fourth floor, where the cinema and children’s playgrounds. According to recent reports, the fire killed 64 people. It is noted that among the victims were 41 children. Later in Sledkom the Russian Federation reported that in the case of the fire in Kemerovo have detained five people. In the Kemerovo region due to the incident, announced three days of mourning.

On Tuesday, March 27, in Kemerovo residents came to the rally with a demand to tell truthful information about the victims on fire.

April 4, 2016 trump Comments Off on In the administrative building in the South of Moscow there was a fire

April 22, 2016 trump Comments Off on The FBI paid the hacker for hacking iPhone the terrorist more than $1 million