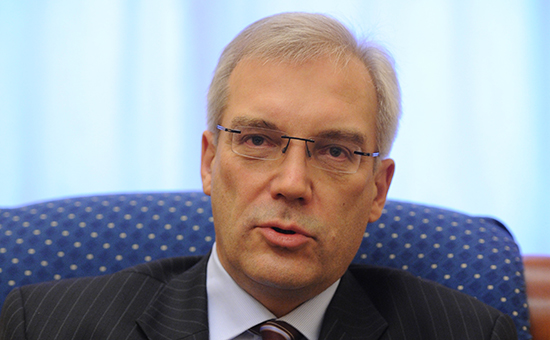 Russia at negotiations with the American side put forward proposals for prevention of incidents at sea and in the air. This was told in an interview to “Kommersant” Russia’s permanent representative to NATO Alexander Grushko.

He said that today Russia has a solid base of bilateral agreements with NATO countries on the prevention of unintended incidents of a military nature. According to him, as the Foundation for preventing incidents that is enough.

“With regard to specific approaches, [aircraft and ships] that occurred recently, that Russia at negotiations with the American side made proposals, which clarify certain provisions of the bilateral agreement of 1972 on the prevention of incidents at sea and airspace above it. So the ball is on the side of the Americans,” – said the Ambassador.

“We are ready for dialogue with individual NATO countries, which are interested in the improvement of these bilateral mechanisms,” – said Grushko.

Details of this offer, he did not, citing the fact that “the dialogue goes through the military.” “We are talking about the minimum allowed distances of rapprochement between vehicles and aircraft on frequencies for which you wish to get in touch, and so on. That is about the whole complex of measures which would allow to engage more effectively and understand the maneuvers of each other in such encounters,” he explained.

The envoy also added that Moscow, in his time, proposed to adjust the position of the Founding act of “substantial combat forces”. Grushko noted that it has a “rather vague character”. “In due time Russia has made specific — expressed in the quantitative indices of the arms in the major categories of suggestions as to what we mean by “substantial combat forces”. The reaction from NATO was not followed”, – he stressed.

Earlier today, Grushko said that the Russian leadership is counting on a serious discussion about the increased activity of the Alliance near Russia’s borders during the meeting of the Council Russia — NATO, which will be held on July 13.

“We expect a Frank and serious discussion, primarily on issues related to increased NATO activity along Russia’s borders and its impact on security and stability in Europe as a whole and its regions,” the statement quoted Grushko “Interfax”. According to Grushko, at the upcoming meeting “will focus on the state of military security in the light of those decisions, who are preparing for the Warsaw summit of NATO”.

A meeting of the Council Russia – NATO will take place after the NATO summit in Warsaw, scheduled for 8-9 July.

1 July the President of Russia Vladimir Putin during a joint press conference with Finnish counterpart Sauli Niinistö said that Moscow will try to start a dialogue with NATO. “What should we do in response to the increased presence of NATO at our borders? Let me remind you that Russia has accepted the decision and implemented it — we from the Finnish-Russian border took our troops to a distance of 1500 km And nothing has still not changed — the way it is. And on our borders in the Baltic States, NATO troops are increasing. And what can we do?” — said Putin.

“The President [of Finland] proposed the first steps to increase trust. Try to start a dialogue with NATO at the meeting of the Council Russia — NATO in Brussels,” the President added.

At the same time Putin has promised that on his return to Moscow will give instructions to the foreign Ministry and the defense Ministry to put the issue on the agenda during the upcoming meeting of the NATO Council — Russia.

Damascus ruled out the link between withdrawal and contradictions with Moscow

March 15, 2016 trump Comments Off on Damascus ruled out the link between withdrawal and contradictions with Moscow

“It’s dying convulsions of the militants,” the warrior atoms Gordiychuk about the aggravation at Avdeevka

February 2, 2017 trump Comments Off on “It’s dying convulsions of the militants,” the warrior atoms Gordiychuk about the aggravation at Avdeevka

Milestones of the week. Acceleration Saakashvili, “Rod” complications and difficulties in MIA

November 18, 2016 trump Comments Off on Milestones of the week. Acceleration Saakashvili, “Rod” complications and difficulties in MIA