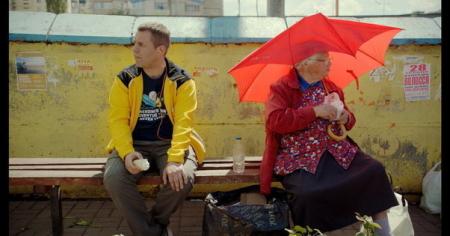 The world premiere full-length debut of Director and scriptwriter Tony Noyabreva took place this July in the National competition of the 9th Odessa international film festival.

The appearance of the ribbon in Odessa was quite justified: short-length debut Tony Noyabreva “independence Day” in 2012 received a Special diploma of the jury of Ukrainian national competition, and “Hero of my time” was presented in the industrial section of the festival, when the film was still going on.

Not less natural, however, it would be the appearance of the Comedy, whose action takes place entirely in the capital, and at the Kiev Molodist IFF, specializing in the openings. Then, in 2012, “independence Day” Tony Noyabreva was the best film of National competition, and in 2016 another one of her short — “All is well” — in the same competition was “especially mentioned” jury.

That it is not only the festival in Odessa and Kiev are very strong, Tonya Nobaria said before the world premiere of the film.

She noted that she grew up in Odessa and half of the audience of the premiere, one way or another, bound by ties of kinship, jokingly asking “the audience-non-relatives” especially to actively support her painting to raise a family rating. And also shared that in the sound design of the Kiev Comedy, was used Odessa street noise recorded about the Importation.

Ironically the story of a provincial Zhorik (Eugene Bushmakin), which is a couple of rapid months trying to conquer the capital rising “social Elevator” in a situation when even an ordinary Elevator in multi-storey panel house does not work, liking of the jury and they said Tonya Noyabreva prize for directing. Film actor

It could be noted in the National competition Odessa international film festival “Hero of my time” and for the best role, because the actor is Eugene Bushmakin became unconditional emotional atomic nucleus 80-minute tape.

He had filmed Tony Noyabreva — played a major role in “independence Day”. Then his character was built astounding high-quality plans leisure activities during the public holiday, which shattered the banal booze and constantly break.

Optimistic Zhorik from “Hero of my time” behaves in a similar way. He still spends time for a liter bottle of beer and conversation about the bright future that is to come. Only instead of searchlights entertainment builds castles in the air achievements, in which the attainability of reading motivational brochure with the slogan “I See the goal — do not see obstacles,” firmly believes, no matter what.

See ALSO: Growing up with Kusturica and Tarantino: Oh the drama “When a tree falls” Unkempt daily

The social texture of “Hero of my time”, showing the dissonances of the capital, full of minibuses and Porsche stuck in traffic jams on the backdrop of shiny skyscrapers and filthy plastic booths, was presented in the short film Tony Noyabreva “All is well” — story of a talkative grandmother, who sells herbs in the transitions.

So grandmothers are now also given attention, especially in scenes showing the everyday life of the housing Department, where in a queue on reception to the authorities are exclusively those who “just ask”, accompanying grueling waiting accompaniment nagging complaints filled with recognizable details Ukrainian uncomfortable everyday.

The many faces of Kiev is a unique character in the film. Director of photography Tato, Kotetishvili documented accurate and at the same time artistically redundant in fixing public places, transforming the types of capital in valuable anthropological sketches. They are kind of “bumps” in the way of plot and at the same time emphasize the crucial feature of being Zhorik — it exists in Kiev is exclusively in the public space, stripped of his — personal — space. From the novel to the anecdote

“Hero of my time” successfully maintains the tone and rhythm of short works by Tony Noyabreva due to the chosen structure of the narrative. The film consists of three almost separate stories dedicated to the relationship of the hero with the housing Department, contemporary art and “vague objects of desire”.

The Comedy spark in each of them carving sharp contrasts: attempts Zhorik to participate in the formation of civil society in a particular house are faced with corruption and Soviet unsociable neighbours his contacts with contemporary art undermines the lack of aesthetic training and the arrogant tyranny of artistic and secular elite and the search of love hinders the understanding of difficult to overcome the social hierarchies and the fact that he himself may become the object of predatory female calculation.

Tonya Noyabreva feels great domestic social reality, with a smile negating the effect of a poster “Ukraine is Europe”. But for the sake of comedic effect is quite able to set the ‘volume’ of humor on “high”, turning a separate stage in the anecdote. Ukrainian Forrest Gump

As a consequence, just snatched the meta of reality coexist in the “Hero of my time” with a dramatically caricatured simplifications, if descended from the TV screen — the familiar cliches of flat sketches of the domestic Comedy. They gain artistic weight only thanks to the talent of Eugene Burmakina, which is the image of the hero sincere spontaneity and clear enthusiasm.

It Zhorik, relying on the strength of the social structure, erasing from them the scum of the populist illusions — not a cynic, but not quite the simpleton. It exists in the universal key of the great artistic tradition, one of the brightest young representatives of which is Forrest Gump, and a Ukrainian treats her.

This interpretation is complementary to the image of the overconfident hero, such a life, “spitting in the well” is a different angle and the subject of institutional collapse of the “social mobility”, metaphorically embedded in the plot of the Comedy.

The problem is not only in the “social Elevator”, but in Zhorik. Difficult to rise, when running away (and especially go) in place.

September 13, 2016 trump Comments Off on Special services found a Russian trace in the bombing of the Chinese Embassy in Bishkek

July 30, 2016 trump Comments Off on When shooting in Washington killed three people

September 5, 2016 trump Comments Off on The journalist of the “Caucasian knot” was sentenced to three years in prison