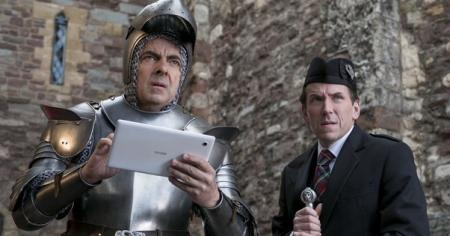 One soldier in the field

A Secret service agent of her Majesty, who fancies himself a James bond, and being as clumsy Mr. Bean, for the third time plays an outstanding master of British Comedy Rowan Atkinson. Since the actor has passed for sixty, his johnny English spends the days of military retirement, teaching students how to hold a Martini glass and seduce the ladies, to disguise, to set traps and choke enemies with a noose. It is clear that children of such a teacher — as he himself is crazy.

After a massive hacking attack revealed to the world the identity of all existing British spies, the Prime Minister (Emma Thompson) turns to the agents retired for help to catch the criminals that threaten national security. The only veteran able to immediately begin execution of the job, is johnny English, whose clumsy behavior curiously helps him overcome a selection sieve.

He goes to a French resort where there was a break of the computer systems taking the trip of a snarling gasoline exhaust “Aston Martin”, devoted assistant (Ben Miller), a gun and numerous gadgets worthy of a classic spy adventure the 1960s, which for him took out a dusty warehouse of a closet. But from what I’ve heard flatly refuses — so it’s from a smartphone. And political correctness.

“Retrograde” set of attitudes of the hero in relation to women, French, electric vehicles and advanced digital technologies the authors play with great skill and worthy of respect, tact, striking sparks of irony in the situations of the collision of old and new and at the same time trying not to imagine the classic image of a British spy, which is based on tailored johnny English, a cheap, moth-moth caricature.

Hero is absurd, since it behaves like James bond in a handsome body of Sean Connery, being neither one nor the other. However, the manner of Rowan Atkinson remains extremely serious. He once again manifests himself as the bearer and continuer of the outstanding British acting tradition, transmitting an unconditional inner confidence johnny English in the correctness of their actions and never giving reason to doubt his human multidimensionality which would be unimaginable feints he didn’t dump on the screen.

The combination of the seriousness of character and bordering on the absurd results of his actions serves as an inexhaustible source of effective physical Comedy, which opens onto the screen during the tumultuous French dancing on the dance floor, experimenting with virtual reality and directly spy routine. The authors of the tape is not looking for a special originality, but not step on the rake of repetition. Even when their jokes are waiting, they “work”. In particular, because David Kerr and Rowan Atkinson are very good at waiting, patiently erecting a humorous Foundation. James bond, whom we almost deserve it

Paying close attention to the comedic aspect of the picture, the authors, however, completely ignore the intrigue, almost hiding the figure of the villain, who organized a tricky attack on the Kingdom, and making no particular secret of the fact that johnny English will be crowned with a happy ending. The obstacles that they’re getting in his way, only strengthen this confidence, turning the tape into a kind of game giveaway, where the expected winner is the one who will cause the hall to bouts of laughter.

Of laughter over it that creates the hero but not the hero. In the end, he is suddenly worthy as possible in the clownish space Comedy — a follower of James bond and other worthy men of Britain: the scene of the final act of the adventure becomes a medieval castle, and johnny English acts to combat computer terrorism in knight armor and with a sword at the ready, in his own way asserting the importance of traditions to modern culture. Olga Kurylenko in triplicate

And in the picture is the best place Olga Kurylenko, which at one time played the real James bond girl and now he’s playing stilted opponent johnny English — strong Russian with a gun, bright lipstick on her lips and expressive neckline. By the way, in a slightly different image of the actress can be seen in two paintings that are now in movie — mad imagination of Terry Gilliam’s “the Man who killed don Quixote” and the horror film “Mara” Clive Tonga, where she chases the monster from his dreams.

June 30, 2016 trump Comments Off on Off the coast of Libya detained the tanker with five Russians on Board

In Germany burned down the famous Goethe tower

October 17, 2017 trump Comments Off on In Germany burned down the famous Goethe tower

April 8, 2016 trump Comments Off on Dvorkovich announced the launch of the third line of the power bridge to Crimea