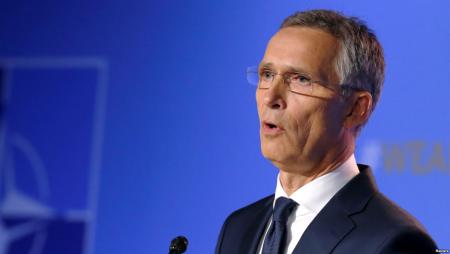 NATO Secretary General Jens Stoltenberg said that the Alliance does not intend to retreat before the pressure of Russia.

About this Stoltenberg said after a meeting with John Bolton, the US presidential Advisor on national security.

“For us there is no contradiction to be firm and decisive in our approach to Russia, and, at the same time, seek a dialogue”, – said Stoltenberg during a speech at the research center the Heritage Foundation.

Stoltenberg stressed that NATO is not interested in confrontation, noting that Moscow “is ready to use military force against neighbors”:

“We see Russia, which has been investing in numerous (military) capabilities, as well as in exploration. It is for this reason that the NATO allies increased defense spending for the first time since the end of the cold war”.

Jens Stoltenberg said that he sees little indication that Russia reduces the activity in this direction: “We saw how they used media and social media disinformation, trying to influence political processes in different European countries.”

Stoltenberg also said that NATO will continue to support the efforts of Georgia and Ukraine in joining the Alliance: “Georgia will become a NATO member”.

In the United States condemned the sly swindlers

July 21, 2018 trump Comments Off on In the United States condemned the sly swindlers

Pompeo discussed with the Chairman of the liberation Brunson

July 29, 2018 trump Comments Off on Pompeo discussed with the Chairman of the liberation Brunson

August 25, 2018 trump Comments Off on New US sanctions against Russia will come into force on 27 August