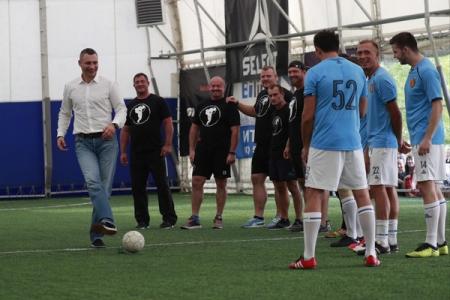 The mayor of Kiev Vitali Klitschko called for the festival of contemporary heroes “Muromets Fest“, which took place in the capital Park “Murom“ – the press service of Kyiv city state administration.

“We first conduct in Kiev festival “Fest Muromets“. And I am convinced that he will become a great annual event for the strong in body and spirit. We support our athletes, develop and open platform for mass sports in the capital – in the updated parks, courtyards, schools and the city. Sport is health, confidence and lots of positive emotions. So it is very good that we have such a Park “Murom“ and the extreme Park, where you can enjoy various sports“, – said the mayor of Kiev.

He recalled that a monument to the hero of Kievan Rus, Ilya Muromets installed in the Park, the first phase of which was updated this summer. In place of the current Park “Muromets“ in the XI-XII century, housed a giant Outpost.

During a visit to the festival Vitali Klitschko has witnessed the establishment of a record of Ukraine on the movement of four trucks with a total weight of almost 32 tons over a distance of 20 meters 30 centimeters. The record set by President of the Federation of strongmen of Ukraine Sergey konushok. The weight of the athlete only 120 pounds.

Visitors of “Muromets Fest“ waiting for the show bodybuilders, Darts tournaments, master classes in Boxing, Thai Boxing, tournament of archers, a test drive of all cars on the radio, a master class for children on self-defense on the street.

In early August, was opened sculpture of the hero Ilya Muromets in the Park “Murom“ and presented the first place updated Park.

It is planned that the reconstruction of the Park will be completed next year.

March 14, 2016 trump Comments Off on The industrial production in the Eurozone showed the best result in six years

In Kiev Lukyanovka jail his death

April 10, 2018 trump Comments Off on In Kiev Lukyanovka jail his death

July 13, 2016 trump Comments Off on The Venezuelan army has taken control of the distribution of food and medicine