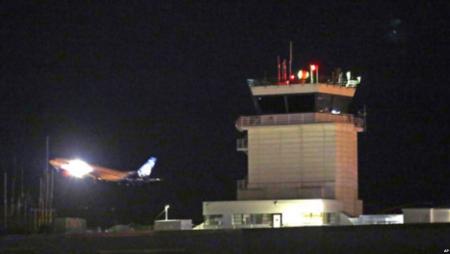 Mechanic airline in Seattle, Washington state, stole a passenger plane, flew it over the water, trying to do aerobatics, and crashed into a sparsely populated island Ketron in the Puget. It happened on Friday evening.

Air traffic controllers, according to audio recordings of the talks, unsuccessfully tried to convince the man they called Rick (Richard) to land the plane.

Later, the hijacker stated that he does not want to harm anyone evil, and called himself “just a broken guy.”

Constance von Muehlen, one of the leaders of the company, Horizon Air, posted a video on Twitter in which he said: “Our thoughts are with the family of a man who was on Board the aircraft, as well as our hearts together with all our employees, “Alaska air” and “Horizon air”. Company Horizon Air is part of Alaska Air Group.

The airline did not mention the name of the deceased in the crash of a person.

The Sheriff said that two F-15s were scrambled to pursue the hijacked aircraft, but the fighters have nothing to do with the crash.

County Sheriff, Paul Pastor pierce said there is no indication that this was a terrorist act. On Board the ship had no passengers.

The international airport of Seattle-Tacoma was closed during the incident.

December 19, 2017 trump Comments Off on In Puerto Rico re-count the number of victims of hurricane “Maria”

John McCain refused to continue the treatment of brain cancer

August 25, 2018 trump Comments Off on John McCain refused to continue the treatment of brain cancer

May 16, 2018 trump Comments Off on Congressmen are not concerned with the threat Pyongyang to cancel the summit