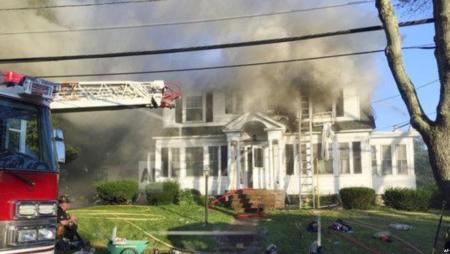 The national transportation safety Board (NTSB) began to investigate a series of explosions of household gas and a fire that occurred on 13 September in three cities in Northern Massachusetts. Most questions from the Agency came to the company-gas supplier.

Fully or partially exploded and burned 80 houses in Lawrence, Andover and North Andover. One person was killed, about 20 injured in fires and explosions.

Stephen Bryant, head of Columbia Gas on September 14 brought their “deep and sincere condolences” to the family of the deceased, H. E. Dr. Leonel Rondon, who was only 18 years old. In that moment, when the young man drove off the car from a burning house, inside the building the explosion occurred. The car driven by Rondon, fell down the chimney.

At the press conference, Bryant noted that the company “made all the necessary actions as quickly as possible”.

Despite the fact that that the Chairman of the NTSB noted that the main objective of the Commission is not to find the guilty and “to find out what happened, and how to make it not happen again”, many residents and local officials say that Columbia Gas failed to respond to the crisis quickly and effectively.

September 14, Massachusetts Governor Charlie Baker declared a state of emergency in the region of the valley of the Merrimack, where there have been gas explosions. Baker instructed the company, which competes with Columbia Gas recovery.

According to local authorities, about 8 thousand people were evacuated from their homes, while their houses were checked by emergency personnel. All these houses were disconnected from gas and electricity for safety purposes. According to the Governor, forced the evacuation could last at least another few days, if not weeks.

According to preliminary data, the explosions were caused by excessive pressure in the pipeline. Shortly before the series of incidents Columbia Gas had informed its customers in Lawrence and Andover on the beginning of works on modernization of gas pipelines.

Trump has promised not to allow Russian interference in the elections

March 8, 2018 trump Comments Off on Trump has promised not to allow Russian interference in the elections

January 10, 2018 trump Comments Off on The United States will continue to investigate “attacks on health” diplomats in Cuba