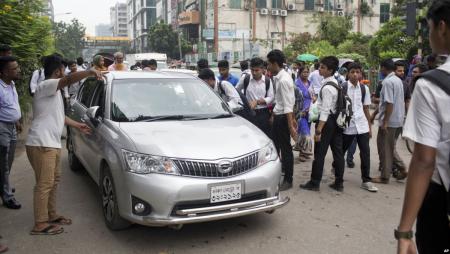 The car, which was the US Ambassador to Bangladesh Marcia Bernicat, was attacked in the country’s capital Dhaka on Saturday evening when she left a farewell dinner in honour of the head of non-governmental organizations.

In a statement, the U.S. Embassy in Dhaka stated that the official vehicle carrying Ambassador, “was attacked by a group of armed grown men, some of whom were on motorcycles.” The report notes that the attack occurred in the area Mohammadpur that the Ambassador and her guard “safely left”.

“Ambassador, its drivers and security officers were not injured, – stated in the message, but two cars of protection damages”.

The U.S. Embassy in Dhaka expressed its appreciation to the police for “quick and professional reaction to the incident.”

Bernicat attended a dinner in honor of Vice-President of the human rights organization The Hunger Project (Hunger) Badiul Alam of Majumdar and Director of the organization in Bangladesh.

In the last days in Dhaka was held a protest against the situation on the roads of the country, which were attended by thousands of students. However, it is unclear whether the attack on the American Ambassador with these protests.

August 23, 2018 trump Comments Off on The United States refused to participate in talks on Afghanistan in Moscow

January 15, 2018 trump Comments Off on Trump intends to strengthen sanctions against Iran

April 22, 2018 trump Comments Off on The head of the US Treasury held talks with his Russian counterpart