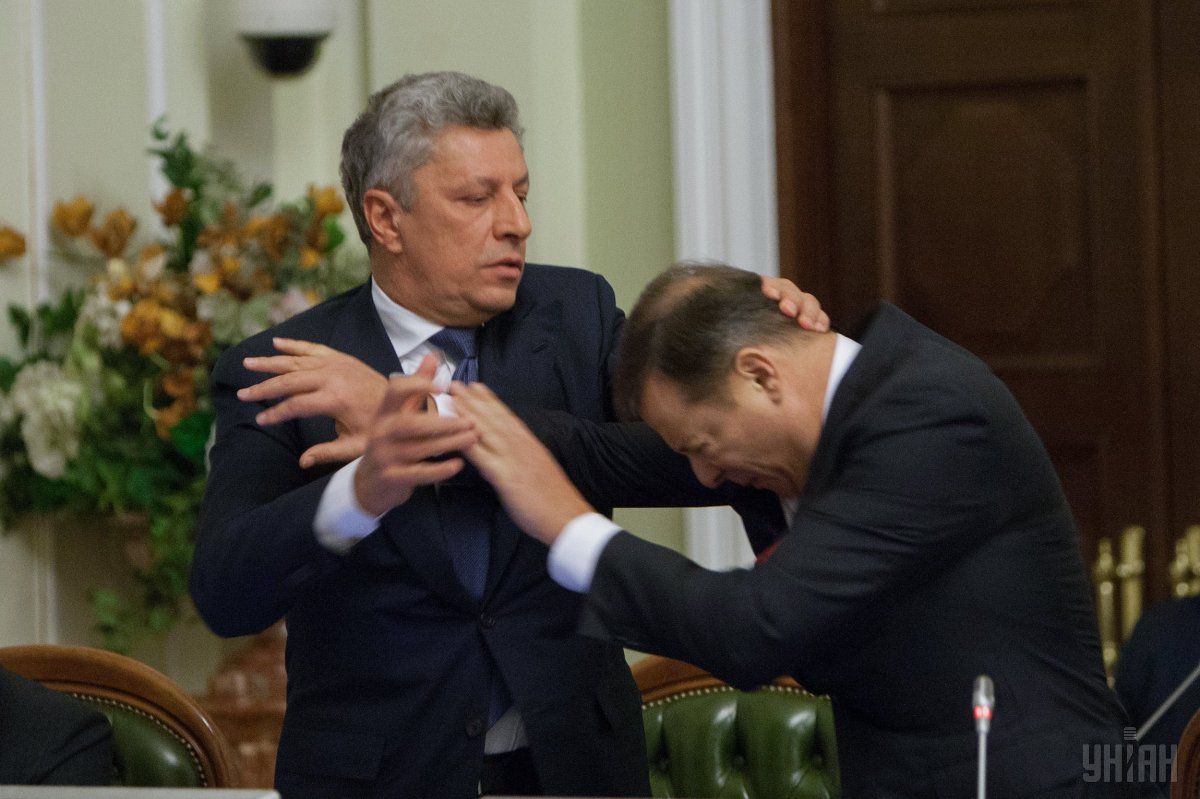 Started this week quite vigorously. On Monday at a meeting of the conciliatory Council of Rada a fight between unruly radical Lyashko and one of the leaders of “opposition bloc” Yuriy Boyko. A fight really is difficult to call. Fighting is a process in which both an active participant. Here everything turned out in his usual Lyashko’s position.

It all started with the fact that the main radical of the country began to resent what it all around him we go for guidance in other capitals. One – in Brussels, the other in Washington, well, such, say, as Boyko in Moscow. Sitting next to a fan of oil rigs at an inflated price history himself listened stoically, while Lyashko did not wonder why SBU is still not sent to prison like him. Here Lyashko, apparently, smartly touched the sore spot, because he, without hesitation, stood up and loaded Lyashko in the jaw.

However, the lover of cows and the leader of the RPL that was not enough, he wound up even more, pulling out of his verbal Arsenal of phrases such as “maskovskiy NIT” and “beast”. On the “outgrowths of Yanukovych,” Lyashko has achieved the desired his active partner and received in the jaw again.

Here already could not stand dominant at the meeting, the speaker Parubiy, who stood up for the beaten of the excited radical. He explained briskly, “are the days when you could use brass knuckles and chairs to breaking the deputies of the head” were in the distant past. “Opposition” silently left the meeting and went on.

The bottom line is Lyashko commented on the event in the spirit of “fists have a mind” and promised to complain to the President and the attorney General. Well, Boyko said that to endure abuse do not intend and promised to respond in the same spirit in the future.

In addition to beating Lyashko this week was another significant event. The November 15 meeting of the Committee of the UN General Assembly supported the resolution on human rights violations in Crimea, the Russian occupation authorities. The importance of this resolution that for the first time in the official documents of the UN, Russia recognizes the invader state, and the Crimea and city of Sevastopol temporarily occupied territory. 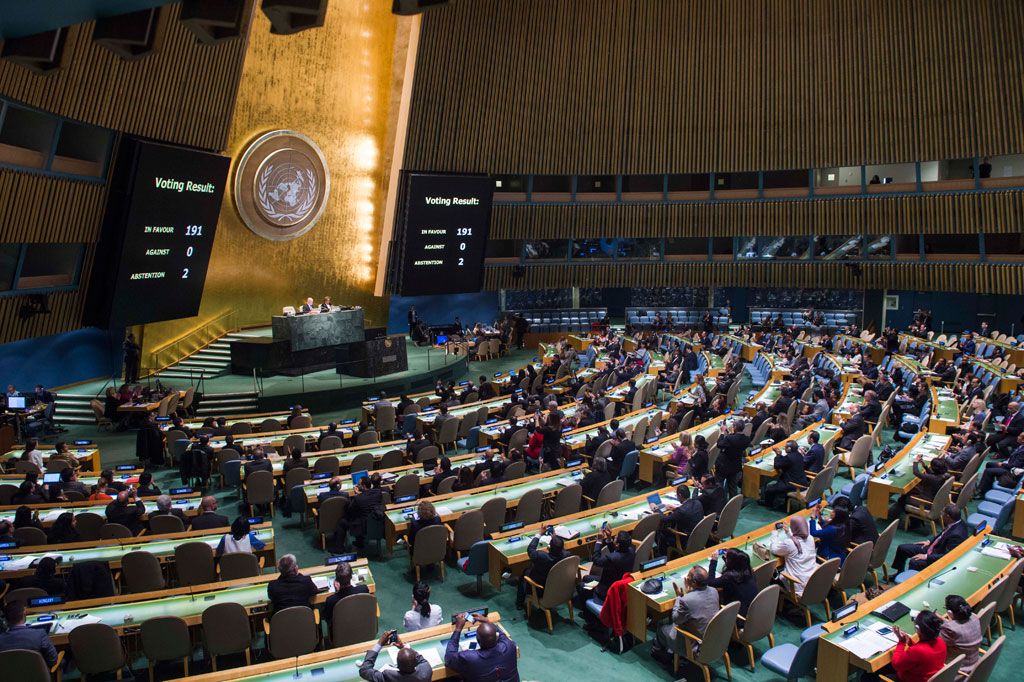 Here, however, it is worth noting two points. First, the resolution must be approved by the UN General Assembly, the meeting of which is scheduled for December 2016. And, secondly, adopted by the Assembly resolutions, unlike Security Council decisions, are not binding, as have the character of recommendations. So, let’s be honest ourselves: we must understand that nothing much will change.

Transgression here is another in the list of those countries which voted against, was Belarus. In Ukraine Lukashenko for this position firmly offended, and the head of the Mejlis of the Crimean Tatar people, Deputy Refat Chubarov stated that “Russia took Belarus role Shnyrev” and Minsk can no longer be a place of negotiations on the Donbass.

The foreign Ministry of Belarus rushed to explain that they love Ukraine, but can not do anything because they have a strong belief that “the question of the procedure of consideration of human rights in the UN is a completely different plane and is irrelevant to the topic of territorial integrity of Ukraine”.

Well, Lukashenko said as he continuously advises Russia to make peace with Ukraine, and offers its mediation services. 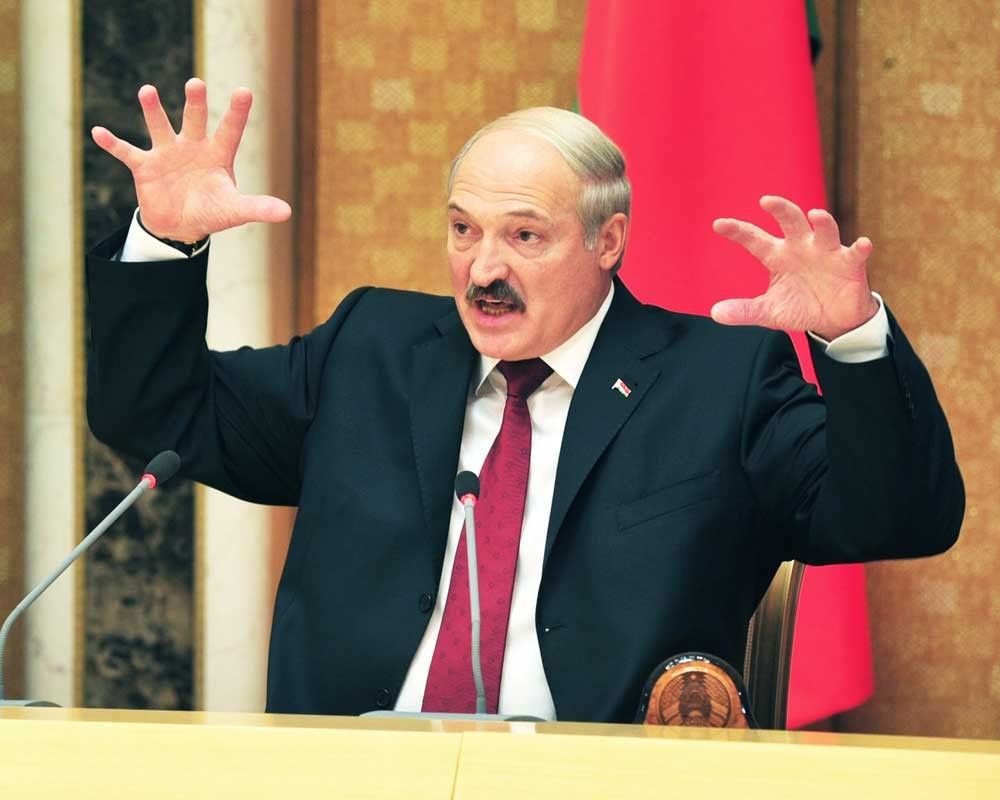 But trouble in the UN, our readers pleased is bad news for Russia, who came from the Hague. The international criminal court announced a preliminary investigation of the Prosecutor in which the occupation of the Crimea is the international armed conflict between Ukraine and Russia. Such a decision could face very unpleasant consequences for the perpetrator, so Putin did not hesitate long and have published the decree about its rising from its knees of the country from the Rome Statute establishing the International criminal court.

However, according to lawyers, Vladimir P. it will not save. In the case of adoption of negative for Russian decision and to identify the guilty will be issued the international arrest warrant, and as soon as the suspect is on the territory of one of the countries that ratified the Rome Statute (and there are countries now in the world 123), he should be immediately arrested and transferred to the Hague.

Also this week, readers have followed the continuing Exodus of the Georgian “Vikings”. After the departed last week resigned from the post of Governor of Odessa region Mikhail Saakashvili and his team about his resignation from the post of head of national police said Khatia Dekanoidze. 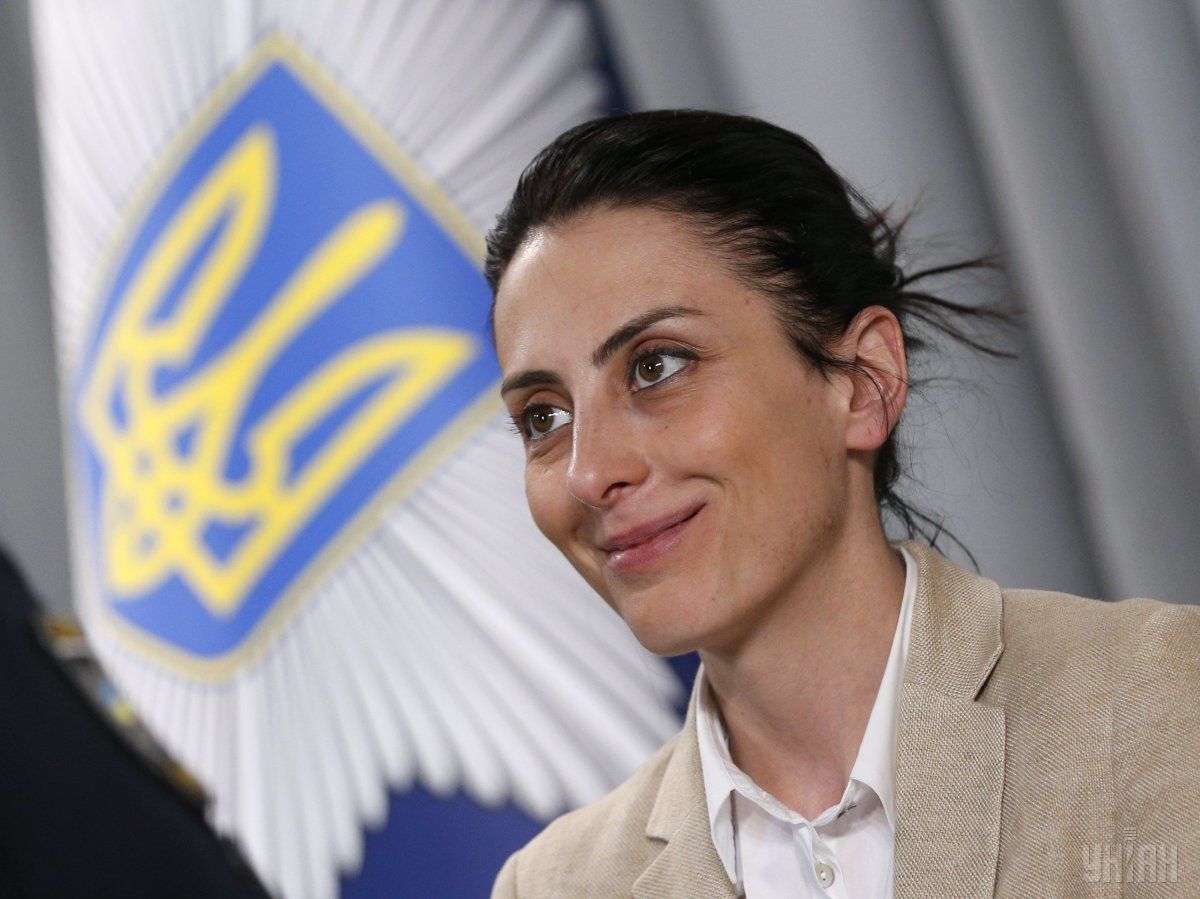 His greatest achievement was the construction police with a “human face”. At the moment she felt fulfilled, while adding that more drastic changes she lacked the authority. About your future it does not spread, but it’s safe to assume that in a short time, rested and refreshed Hatiya can be seen in the ranks of the new political party of Saakashvili.

Hooked Ukrainians and news about the closure of the largest repositories of pirated content in the country. First, under the roller of the authorities unexpectedly decided to arrange a fight against piracy, got Fs.to. The cyber-police seized servers videochronicles and raided the office premises of data centers serving the resource.

Looking at these excesses, another large file sharing EX.ua announced the decision to close, without waiting for the guests of Kiev. According to the report, the owners of the website believe that the recent legislative initiatives “in the field allegedly to combat piracy are all signs of the uncivilized lobbyism”, so work then becomes meaningless. 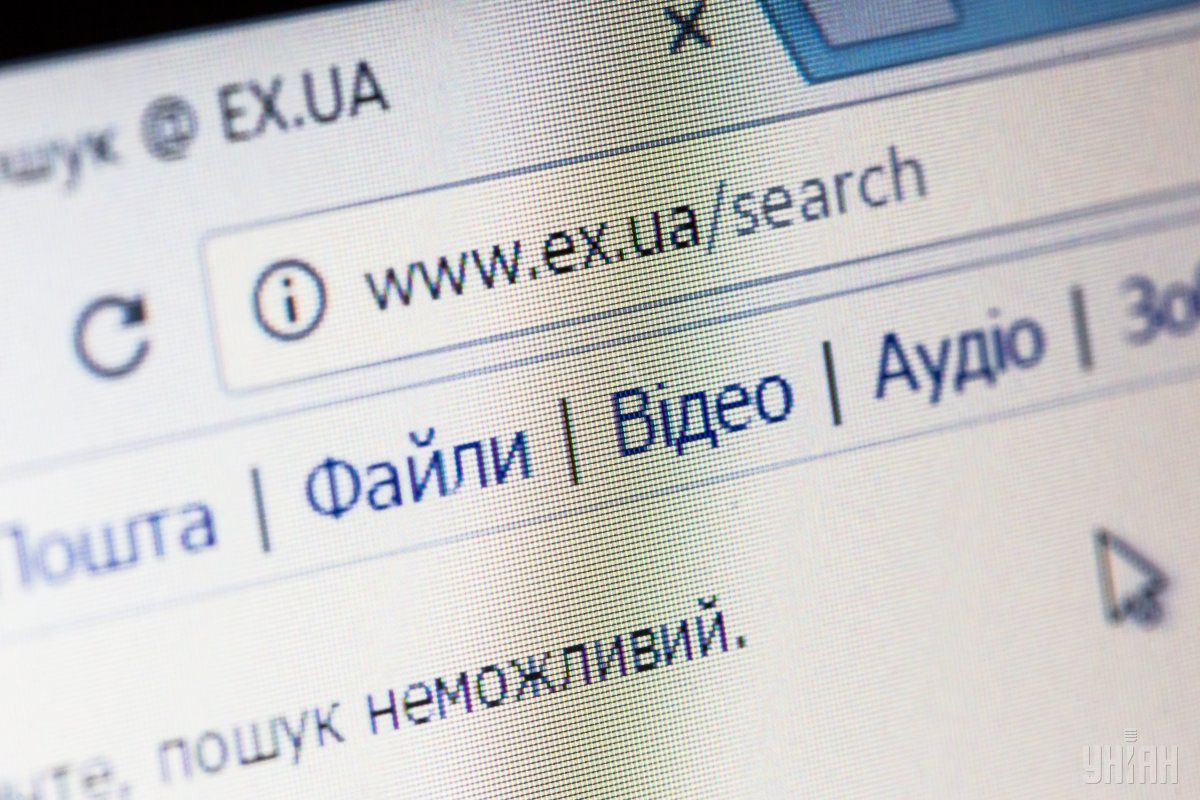 Ukrainians did not have time to recover, as the work stoppage announced and one of the most popular Ukrainian torrent trackers Torrents.Net.UA.

Judging by the reaction, I was glad to close the theater only on Bank. The Deputy head of the presidential administration of Ukraine Dmytro Shimkiv said that the discontinuance of the sharing Ex.ua is part of the fight against piracy in the Ukrainian segment of the Internet. And suggested that violators of Ukrainian and international legislation in the field of Internet activities “to go on the bright side”. Summing up all this sad story, I want to remind the authorities that the fugitive attempts of their predecessors to deprive Ukrainians of favorite TV shows and movies eventually ended very badly. It is possible from time to time to sit with millions of cash and infinitely raise taxes, but depriving the people even spectacles without providing adequate alternatives, you can quickly fill the Cup to the brim.

In General, the week was pretty intense and interesting. Not surprisingly, some important news readers still missed.

Our members decided to once again bump into populism and adopted a law on the protection of the depositors of the Bank “Michael”. The adoption of the law gives the legal basis for the reimbursement of most “controversial” of investors which made contributions related to the Bank “Michael” financial companies, the so-called “pads”. We are talking about 14 thousands of people with deposits for a total amount of 1.2 billion UAH.

Roughly speaking, now every Ukrainian, paying taxes, should be out of pocket to Finance the guarantee Fund of 1.2 billion hryvnias to help “that guy”. Why should we help those who are hankering for deposits at 27% per annum and not asked where he is, in fact, has his money, is unclear. Anyone interested, read publication “Who will pay for the gamble the depositors of the Bank “Michael”.

And finally – the Cabinet approved a list of 19 most important professions in Ukraine, which will be taught for free. You probably thought it was some engineers of unmanned vehicles and satellite systems? I hasten to upset you. In the opinion of the Cabinet, Ukraine is in need of painters, testogel, growers and beekeepers. For training on these and several other wonderful professions from the state budget will be allocated 169 million UAH!

Nikolai Kondratenko, the chief editor of the UNIAN projects

Saakashvili and break boundaries: participant in the events left the custody of

September 27, 2017 trump Comments Off on Saakashvili and break boundaries: participant in the events left the custody of

October 19, 2016 trump Comments Off on KSU started consideration of legality of depriving Yanukovych of the status of the President

Zakharov told the story of the return of the Crimea

May 12, 2016 trump Comments Off on Zakharov told the story of the return of the Crimea